Back to Publications
Next Story The EU’s New Dual-Use Regulation: 5 Things to Know September 2021 - Michael Ingram

On 19 October, the U.S. Treasury Department released its long-anticipated 2021 Sanctions Review. The Review was ordered by the Biden administration as a cost/benefit analysis of current U.S. sanctions collectively to ensure their continued efficacy. The Review was not an assessment of the merits and humanitarian impacts of individual programs, nor did it investigate the effect of sanctions on business.  Instead, the Review had two main emphases, establishing:

Though the Review’s conclusions do not portend a significant short-term change in sanctions policy, it is nonetheless a useful look into the administration’s perceptions. The Review’s recommendations suggest sanctions will remain an indispensable tool of U.S. foreign policy for the foreseeable future.

After the attacks of 9/11, the U.S. government came to see economic and financial sanctions as a “tool of first resort.” Over twenty years later, U.S. national security and foreign policy decision-makers face “new, emerging challenges to the efficacy of sanctions as a national security tool.” Efforts to evade U.S. sanctions by forgoing the use of U.S. dollars for transactions and using digital currencies pose structural challenges to U.S. sanctions enforcement.  According to the authors of the Review, the rise of these new challenges, including “strategic economic competitors” (i.e., China), necessitates the modernization of U.S. sanctions.

Sanctions by the Numbers

As of the Review’s writing, Treasury’s Office of Foreign Assets Control (OFAC) had 9,421 sanctions designations in effect: a 933% increase from the year 2000. 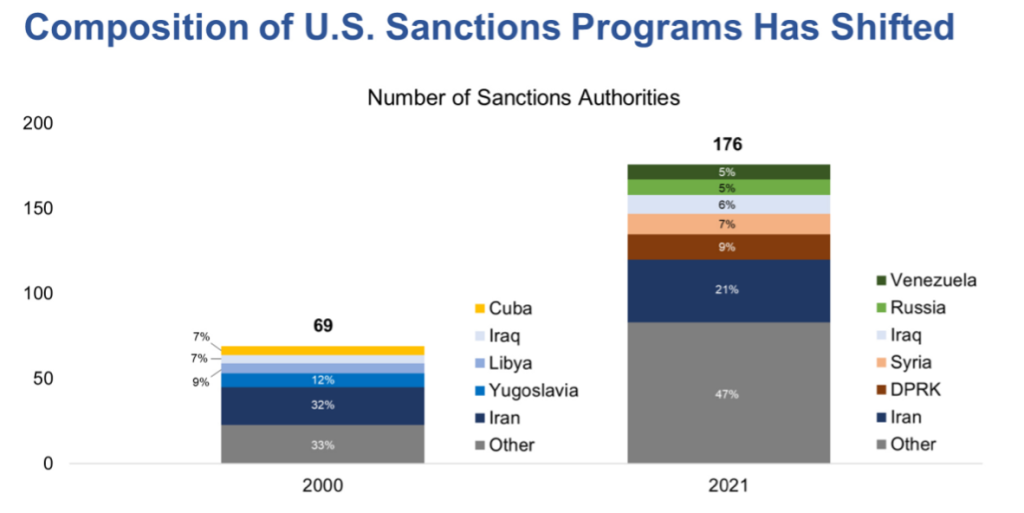 Modernization Plan for the U.S. Sanctions

The Review produced a set of five recommendations for the modernization of U.S. sanctions. This modernization plan seeks to both address common criticisms of U.S. sanctions (e.g., that they are difficult to comply with, lack clear objectives, and impact civilian populations) and contend with the structural challenges that impede sanctions’ continued ability to achieve policy objectives. The five 2021 Sanctions Review recommendations are:

Challenges for the Modernization of U.S. Sanctions

There are several challenges that the Biden and future administrations will face in acting on the policy recommendations of the Review.

The Biden administration increasingly faces scrutiny from critics of U.S. sanctions policy on humanitarian grounds, who had hoped the Review would involve assessments of the humanitarian impacts of individual sanctions programs (see the proposed Amendment #152 to the National Defense Authorization Act (NDAA)). Likewise, there are other political factions within the U.S. Government that would prefer sanctions be applied more broadly and aggressively.

Internationally, multilateral coordination on sanctions has been an early focus of the Biden administration. Forums such as the U.S.-E.U. Trade and Technology Council (TTC) represent a first, albeit limited step, but the extension of multilateralism more broadly is not guaranteed.

The 2021 Sanctions Review will not result in significant changes to U.S. sanctions immediately. The continued desire to counter emerging challenges to U.S. national security and foreign policy may in fact lead to a more complex sanctions system in the short term. Regardless, the Biden administration acknowledges the importance and necessity of sanctions going forward. TradeSecure will continue to monitor the implementation of the Review’s recommendations.

NOTE: Figures 1 and 2 are captured from the 2021 Sanctions Review.

The information provided in this article does not, and is not intended to, constitute legal advice; instead, all information, content, and materials herein are for general informational purposes only.

Back to Publications
Next Story The EU’s New Dual-Use Regulation: 5 Things to Know September 2021 - Michael Ingram